A key feature of renewable sources is their distribution in the territory. The sun, the wind, the water, the tides are not transportable and consequently the production of energy from these sources is necessarily (and democratically) distributed in the various geographical areas.

The transition to renewables, as well as a change in supply sources, also entails a radical change in the energy distribution system: from a few large production plants to many small / medium-sized production units; and from unidirectional energy flows to multidirectional flows between many nodes of a large and complex network.

Regardless of the type of source, there are two types of renewable energy production plant:

Among the renewable sources, the one that more than others lends itself to the distributed model is undoubtedly the sun, a source available everywhere and transformable into electricity through the PV technology, now well established and at affordable prices.

All the roofs of houses and factories can be thought of as the new nodes of the electricity grid. Every node in the network produces a part of the energy it needs, it acquires from the network the energy that it is not able to produce and puts into the network, vice versa, the energy that, in some moments of the day, produces redundant compared to its own needs.

The gradual availability of storage systems, in parallel with the reduction of their costs, will also introduce within the Prosumer the possibility of accumulating the energy produced in excess and to return it to the units of consumption at the most opportune moment, coming to further reduce Prosumer's dependence on the electricity grid. 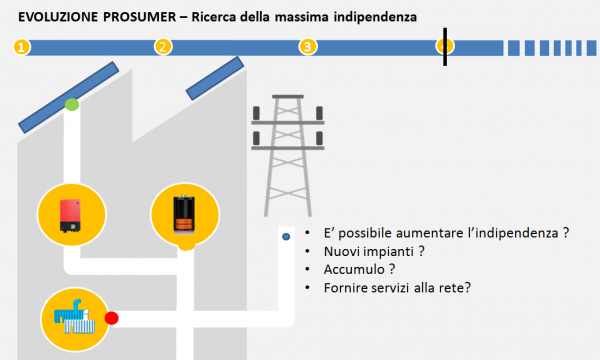 At the beginning of 2017, around 1,200 utility-scale plants were installed in Italy (> 1 MW of power) and more than 700,000 plants of the Prosumer type.  Trends in the world indicate a fairly even distribution of installed power between the two models, with an increasing prevalence of the latter. 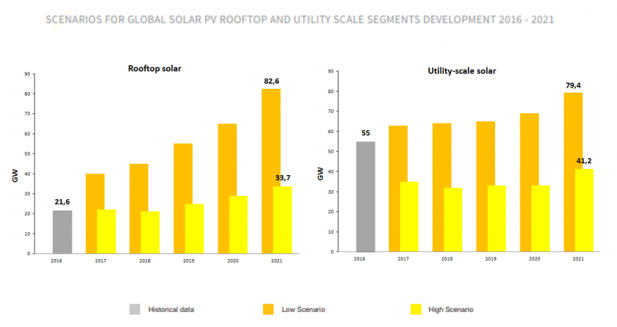 The new energy paradigm characterized by renewable (non-programmable) sources and distributed generation inevitably leads to a new complexity in the management of the electricity grid and in the balancing and capacity services necessary to meet the demand and its trend.

The final perspective is represented by many more and more self-sufficient units that will ask the electric network an ever smaller amount of energy, but answers very quickly to peak needs.

The new complexity of energy flows both within the consumption units (homes and factories) and outside (national electricity grid) will have to be governed by intelligent systems able to respond in real time and manage huge quantities of variables.

Storage systems and Artificial Intelligence represent key technological trends in the near future of energy.